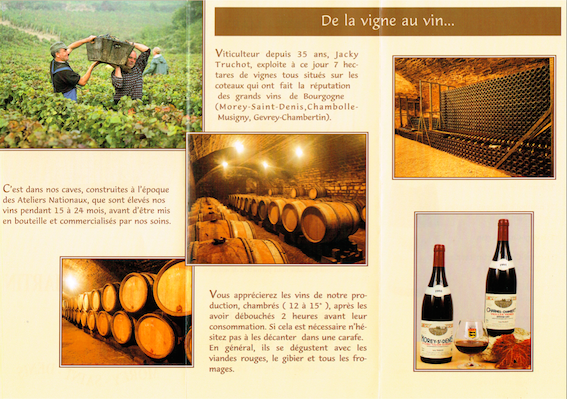 Amongst very particular and astute Burgundy connoisseurs it was never a secret that Jacky Truchot made some of the most elegant, feminine and old fashioned red Burgundy. John Gilman perhaps said it best – “The wines of Jacky Truchot are quite unique stylistically in today’s world of Burgundy, and Monsieur Truchot has managed to find himself a very loyal following for his wines without any of the attendant fame that seems to accompany so much of the great winemaking in the Côte d’Or. How this absence of fame could happen, given the superb and consistent quality of the Truchot-Martin wines is one of the modern mysteries of Burgundy.” In addition to making fantastic wine Jacky Truchot is also one of the most humble and genuine winemakers I’ve met. At my visit to his Domaine earlier in the year (he now only bottles a tiny part of Morey St Denis “Clos Sorbes” for his home drinking), he was as inquisitive about me as I was about him. A wonderful guy, and I was left with no doubt as from where his wines received their full-of-life character.
The wines are 100% pure terroir with an incredible ability to drink so easily and seamlessly – the intensity of the flavours is completely beguiling. The colour of each wine is light – there was no stems added, no new oak, no cold soaking, no cutting yields, no fining nor filtration – the wines just as nature offered. Jacky Truchot learned the trade from his older cousin Henri Mauffre after his return from the Franco-Algerian war in 1961. He joined Henri in his cellars and gradually took over in 1973, and officially in 1980. Jacky kept the same and very traditional winemaking from this era right until his retirement in 2005. Apart from Jacky’s own character in the wines, the fact that he never changed the style of the wine is in complete contrast to almost every other vigneron in Burgundy in the 1980’s, and this is remarkable as drinking Jacky’s wines is just like drinking wines from the 50’s and 60’s. Jacky stood firmly with his belief in his style. Today with all the science and wine degrees going into winemaking this very old fashioned winemaking passed down through generations of families is almost completely lost – except in Truchot’s wines. 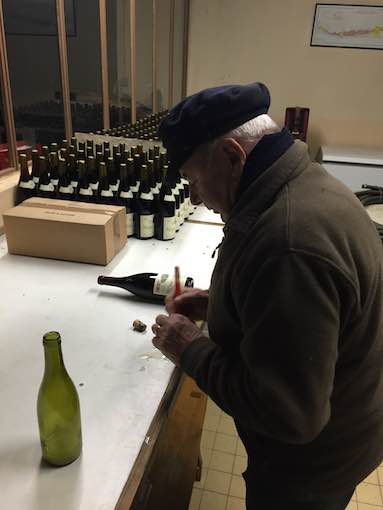 Jacky Truchot in February 2015
John Gilman noted that Jacky Truchot “..has always been content to let his relatively old vines produce as much as they were capable of in any given vintage, and yet his wines, which will often start out a bit delicate in their youth, never lack for intensity or depth when mature. Of course, this old-fashioned style of winemaking is a bit out of fashion these days, which means that it is extremely rare for a young Truchot vintage to receive eye-popping scores that encourage consumers to race out and latch onto a few cases. But this reality beautifully captures one of the remarkable character traits of Jacky Truchot – his willingness to follow his convictions regardless of what the wine market might think at any given time about his stylistic paradigms. He has simply continued to make wine the way he believed it was supposed to be done, and he has the track record of great old vintages to prove that his method certainly produced some magnificent bottles of Burgundy.”
There are many vignerons who are known for their hard work in the vineyards. Few rivalled Jacky Truchot, as Christophe Roumier recalls – “Jacky Truchot has almost always been the first person out in the vineyards every morning. He would never be happy to hear someone else’s tractor go by before he was on this way out into the vines, and on the rare occasion when this happened, you know that he would be up even earlier the next morning!”

Remarkably Jacky’s wines are incredibly consistent. Almost every bottle seems to hit the spot. When paying good money for a bottle you expect it to perform and thanks to this consistency they almost always do. It’s well known that great vintages make great wines, but it’s in the off vintage that you see how good a winemaker is. Jacky’s off vintage wines are excellent, I’ve yet to taste a poor or off bottle. Again, thanks to John Gilman – “As I read through my notes through the years on Monsieur Truchot’s wines, the thing that jumps out at me is simply how consistent Jacky has been throughout the course of his career. The oldest vintage of his that have I tasted was the 1983, and in that difficult year the excellence of that wine simply speaks volumes about the man. There is an old saw that says that a good producer in Burgundy is most often found in the quality of the wines he makes in the most difficult of vintages, and this has certainly been the case with Jacky Truchot throughout his career. I vividly recall just how good his 1984s were, and consequently how simple they were to sell to my clients at that time (this cannot be said about many other 1984 red Burgundies). But Jacky Truchot has evinced another kind of consistency throughout his career, and that has been his ability to allow his style and vision of wine to shine through in each and every vintage, regardless of how each year’s characteristics might try and impact upon his conception of proper Burgundy.”Allen Meadows is also a fan and admirer –

“The wines of Truchot-Martin are a kind of a stylistic throw back to older times. There is no artifice here at all. No cold maceration, no enzymes, no commercial yeasts, no fining, no filtration and not much new oak – even the label is old style; about the only concession to modern times is that there are no stems. As one might expect from such an approach, the wines are elegant and pure examples of their type, which I personally admire. It must be said that the wines are not especially dense and that they could probably benefit from more concentration. But if you love the wonderfully pure aromatics and flavors of unadorned pinot noir, then the wines of Jacky Truchot are worth searching out.” 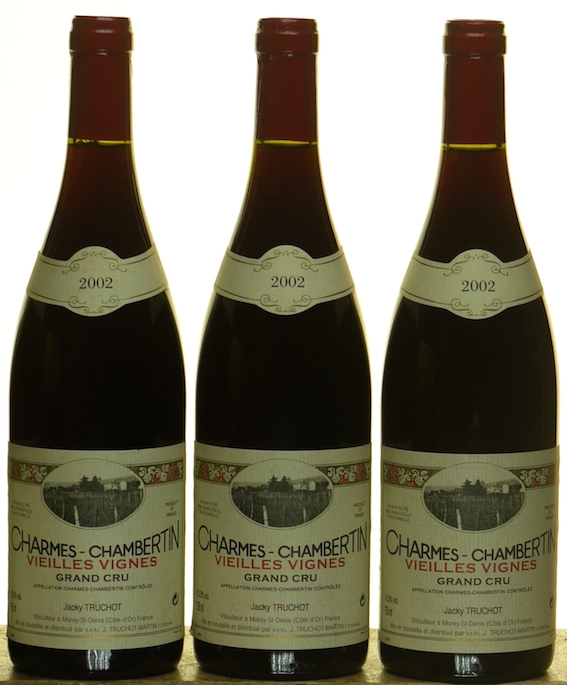 Last week a small group of us gathered at Zhe Jiang Heen for an unprecedented and special tasting dinner of Jacky Truchot wines. My notes are below. Thanks to everyone who attended! – Bourgogne Rouge 2005
Served blind and correctly guessed as 2005. I should have popped and poured as it was stunning when opened a few hours before dinner. Slowed down a bit in glass but exceptional for the appellation. 91+/100.
– Morey St Denis 1999
A beautiful wine that contains a small portion of 1er Cru juice. So easy to drink and a very typical and classic Morey. One of the stars of the night – only Henri Jayer’s Vosne Romanee would match a ‘village’ like this. 93/100.
– Chambolle Musigny 1er Cru Sentieres 2005
The Truchot Sentieres always needs plenty of time and while interesting to see where it was tonight it was perhaps too young! Revisit in 10 years. Only by the end of the evening for those that kept some in their glass did it really come out – in time this will be a wonderful Chambolle. Truchots parcel of Sentieres was an immediate continuation of the vines into the Morey St Denis 1er Cru Ruchots, and is just below Bonnes Mares. 92-94/100.
– Morey St Denis 1er Cru Clos Sorbes 2001
The wine Jacky made the most of – around 600 cases each year. The Clos Sorbes is the heart of the Domaine and the most famous Premier Cru Jacky made. Very floral and earthy the 2001 was in a great spot and absolutely perfect to drink tonight. 93/100.
– Morey St Denis 1er Cru Blanchards 1993
This was drinking so well. Such a treat to drink mature Truchot. Shame it was the only bottle but it’s a great indication of the ageing potential of the Premier Crus. This 1993 will easily be drinking well for another 15 years. Wonderful minerality and really fine depth for this obscure Premier Cru. 93/100.
– Charmes Chambertin 2000
For some wine of the night. This was just wonderful and spellbinding juice. So delicious and undoubtable Grand Cru depth. To drink today, this wins my vote. 95/100.
– Charmes Chambertin 1999
As good as the 2000 Charmes was this was even a notch higher. One of the best Truchot’s I’ve had and certainly on par with the 1993 and 1990 Clos de la Roche. Absolutely stunning and knock out aromatics matched by a palate of tremendous length and vivacity. Hugely energetic and my contender for WOTN. 97+/100.
– Clos de la Roche 1999
On equal quality to the Charmes 1999, this was just as frighteningly good. Today the Charmes was a tiny bit more accessible as is usually the evolution path of these two Grand Crus. The Clos de la Roche always benefits from a few more years and while a delight to drink tonight a few more years in bottle will bring out even more complexity and wildness. 96+/100.
– Clos de la Roche 1993
This wine was stunning. So much goodness and purity going on here. A bottle to drink with 3 pals over a very long meal to watch it unfurl. Tasting juice likes this begs for a second pour, it’s just so fresh and layered. Still not fully mature but offering enough fireworks tonight to enjoy now. 96+/100.
– Clos de la Roche 1990
My wine of the year in 2013. Tonight this was on form and doing what it does best. If the other vintages of Truchots Clos de la Roche’s will be like this then go big on them and don’t say I didn’t tell you. So much joie de vivre like in all the wines but the perfect age took it to another level that the others will come to, eventually. Incredible and unalderated purity – this was a real joy to drink and share with Baron Wines customers and friends. 98+/100. 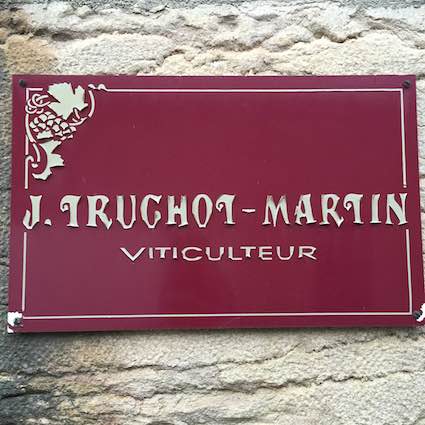